For me, Hannahfield was probably the most intriguing of all the stories that I have been told about our part of Clan Hannay. Since I was a small boy I had heard the story of a large house in Scotland that had belonged to a distant relative of ours, and how we had fought and failed to re possess it from the state.

When I told my father about my plans to put our bit of history on the web, he produced many documents and photographs about Hannahfield, and I finally understood the full story. My fathers cousin also has the “History” bug and I decided to use her account of the rise and fall of Hannahfield. The account that follows was originally written for the Clan Hannay news letter (although I am not sure exactly how far back this was written, it was around 1975).

The Hannah’s of Hannahfield, Dumfries, Scotland. 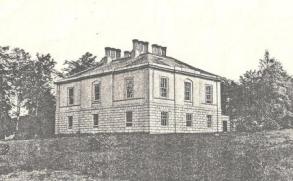 The Hannah’s of Hannahfield – it sounds like the title of an old Anna Neagle film or a novel by Thomas Armstrong. In fact, there was really only one Hannah of Hannahfield, and this account is as much an attempt to show the fascination of tracing family history as it is a story of The Hannah’s of Dumfries.

I heard of our clan society from a Hannah cousin (my Dad! :Stuart) and he lent me a copy of a family tree which had been prepared in support of a petition to the crown in 1870 by our great grandfather for the return of the property in Dumfries called Hannahfield. I already knew of this and had spent a short holiday in South West Scotland, when I discovered the family grave in St Micheal’s, Dumfries, and tried to locate Hannahfield in the area of Kingholm.

I had no time to visit the local library in search of clues or to go as far as Edinburgh to visit the Scottish Record Office. I paid a brief visit to the Burgh Museum, which yielded no information. I am sorry to say that although in our travels we passed very near Sorbie, I knew nothing of its existence.

The first Hannah on our family tree was John, born in the 17th century. He had two sons and one of them was baptised at Penningham in 1696. This is the first place mentioned and after that only places of burial are named. These two sons each had (amongst other children) a son, and these two cousins, Alexander and Robert, married sisters – Rachel and Agnes Blount. Of these two families, Alexanders at some time went to Huddersfield (please see ‘The Hannah’s of Huddersfield’ for more about this)and Roberts lived in Dumfries.

Robert and Agnes had a son, John, born in 1761, and he became the owner of the Hannahfield estate. He died unmarried and it is Alexander (mentioned above) who is my ancestor. John was born at a time when economic conditions in Scotland were improving and the country was enjoying peace for the first time in centuries. Agriculture, industry and transport systems were developing, literature, art and architecture began to flourish, and many Scotsmen made fortunes in the colonies. John Hannah was once such and owned an estate in Jamaica called Hannah’s Town (please see the “Hannah’s in Jamaica” page for more about this). According to the book “Memorials of St Micheals”, he amassed a fortune in the West Indies. It has been suggested that he might be the originator of the Antigua 1/4d token coin in 1836 (attributed to Hannah & Coltart) but Antigua is a good way from Jamaica and there is no firm evidence of a link.

We know more about the Dumfries property and its loss to the family. Part of it (called Kingholm) was bought from the Burgh in about 1827, at a time when the council was in financial difficulties. Another part of the property had the attractive name of “Cherry Trees” but the name of the whole was changed by its doubtless proud owner to “Hannahfield”. He apparently said that he intended a Hannah to live there after his death, and his only relative with that name was his cousin (a few times removed), my great, great grandfather. He did however have a nephew, his sisters son, Thomas Wood, and it was he who inherited under Scottish law when John died at the age of 80 without leaving a will. Thomas Wood had no children and at the death of his widow in 1868, the property passed to the crown.

Kingholm was the place where the traditional competition by the Trades for the “Siller” gun given by James VI was held and the burgh was anxious to regain this historic site. They petitioned Queen Victoria to re grant them the land, and this was done in 1873.

The “Hannahfield” monument in St Micheals churchyard, described in the memorials as “a stately modern (IE in the 1870’s) monument in the Grecian style” commemorates all these people, including Johns parents, Robert Hannah and Agnes Blount, the inscription reads.

It is interesting to see that Thomas Wood’s brother, James was buried at Kingston, Jamaica at the age of 19, and one surmises that he was out there in connection with his uncle’s Jamaican interest’s. Some of the Blount family, who were cousins of the Hannah’s, also died in Jamaica, according to the other monuments.

A second visit to Dumfries (around 1975) in search of Hannahfield, proved more fruitful. This time I had written to the local library to ask if they had any record of the house called Hannahfield. Their reply enclosed a map showing that it was now part of Crichton Royal Hospital and an extract from “The Chronicles of Crichton Royal” by C.C. Easterbrook (1940) saying “Hannahfield House, with gardens and grounds of 8 acres, also adjoining the institution property, is leased from the crown (war office) at Whitsunday for 7 years, at a rent of £65 p.a and is used as a residence for several First House Gentlemen”. This was the first time I had heard what had happened to the house.

On my previous visit I had searched the wrong area and, in fact, the house was difficult

to find, as it is now called “Ladyfield West”. I found Cherry Trees, a row of extremely plain dwellings, which I later discovered had earlier been occupied by permanent military personnel. As the property belonged to Crichton Royal, I crossed the road to the main building and called at the enquiry desk. It felt rather foolish to say that I was enquiring about an ancestral home but the staff were extremely helpful and arranged for the superintendent of Ladyfield West to take me on a tour of the house. It is now a home for disturbed children and has been stripped of furniture, carpets, etc. Its best feature is the entrance hall, with an alcove in the centre and pillars either side, in the classic style, the walls having been painted a deep blue. The house is built in the Georgian style, with a flight of steps to the front door, as the ground slopes downwards to the rear of the building.

It is of stucco and ashlar, two storeys high, and of symmetrical design. I gathered that even the chimney stacks had been removed, to the annoyance of one of the staff who took an interest in this old house. What is now called Hannahfield Hall is in fact an old Army equipment store and is also part of the childrens unit of the hospital.

As no photographs of the house appeared to exist, I called at the Burgh Museum, but Mr Truckell, the curator, had nothing but photographs of military personnel taken in the grounds. He suggested I wrote to the hospital administration and asked if they had any pictures of the house. This I did on my return home and later recieved a very interesting letter with details of the house and grounds from the hospital secretary, Mr G B Turner, who had just retired. He also sent me a picture of the rear of the house and extracts from McDowells “History of Dumfries” which I had studied in Dumfries library. The first mention of Hannahfield in the history books was that Kingholm was bought on the 19th July, 1827, by Mr John Hannah for £6,300 and a footnote to this said that in 1712 the same property was left to John McNish, Deacon of the weavers, for “Twinty-Two pounds sterling yearly”(yes that is spelt correctly despite what spell check says: Stuart).

Among the more interesting points was the fact that when Queen Victoria’s sanction was given in 1873 to the gifting of the whole of Hannahfield for the purpose of a public park, there was great rejoicing “a cake and wine banquet , clanging of bells, and crackers in the street at night”! Unfortunately after delays over the scheme, which also included the provision of bursaries for education, a change of Government led to the land being gifted by the crown to the war department in 1875, and it was used by the military until after the first world war. The house was first leased from the war department in 1889 and in 1929 the house and estate of 33 acres was bought from the war department.

The Hannahfield burseries created in 1879 with £9,500 of the Hannahfield estate are still awarded. An examination in English and general knowledge is held each year throughout Dumfriesshire, Wigtownshire and the Stewartry of Kirkcudbright and the results of this examination, together with the individuals school record, leads to the award of three bursaries of £70 per annum to University or College. These bursaries run for 3 years as necessary to complete the course of training.

Mr Turners letter included his summary of the history of Hannahfield house and estate and a map marked with the boundaries and various buildings. He said that in his early days (he was born very near the estate) the grounds were beautifully kept. There is a walled garden and an arbour with sandstone pillars and canopy. It was interesting to me that Thomas Wood, John Hannah’s nephew, was the gardener there before he inherited it in 1841. The house appears in a list of scheduled buildings (category B) but I noticed that the gateposts (Category C) had been knocked down a few years ago to widen the entrance. One wonders what will eventually happen to the house?

I am very grateful to Margaret for all of her hard effort, the history of Hannahfield is one of great hopes for the estate and its inheritors, hopes which were unfulfilled, and now there is no hope of a Hannah ever again living in Hannahfield (unless I win the National Lottery!). I have recently discovered pictures of Hannahfield House (Ladyfield West as it is known now) which I have asked for permission to display here,  the house is in a terrible state of repair and this is a real tragedy. One last item which may be of interest is the petition for the return of Hannahfield. I have an original copy which I intend to get scanned in and I will add it here as soon as I can.